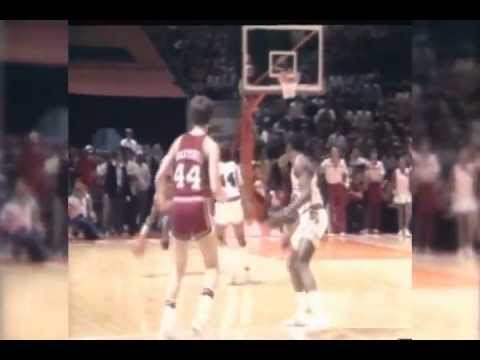 US Reed my hometown hero! I was sitting in the managers office in Wiengartens Pine Bluff listening to the game when he hit that shot. I yelled so loud several checkers came over to see if I was okay. Reed’s HS coach Jerry Rook was a dear friend. We tried that shot quite often in the PBHS gym. I never hit it. I’ll bet Jerry did.

U.S. Reed hit another buzzer beater to beat Texas. It was at Barnhill Arena. It was from about the elbow. Feb. 2, 1980. 60-59. It was what prompted Abe Lemons to say (after Reed’s miracle shot at Austin in the NCAA tournament to beat Louisville) “I have seen that shot before!”

I have looked many times for a clip of that 1980 game-winner (I vividly remember seeing it on TV at the time) but I’ve been unable to locate it on the internet.

Reed also hit a free throw with no time on the clock a year or two later to beat Texas A&M at Barnhill. He was clutch.

Reed also hit a free throw with no time on the clock a year or two later to beat Texas A&M at Barnhill. He was clutch.

I remember that play vividly. Score was tied with 2 seconds left. A&M inbounded to Dave Goff who tried a halfcourt heave at the buzzer. Reed slid under him and Lynn Shortnacy called Goff for landing on U.S. To be honest, it should have been a block with Goff shooting FTs for the win. But we got the call, U.S. made the first FT with :00 on the clock and we won.

So I was assigned to go to the A&M locker room that night for postgame quotes. They were quite POd and very much not interested in talking. I remember Rynn Wright, who was a big bad mutha, saying “you got what you wanted” and advancing menacingly on the small media contingent. We got out of there and I reported that the Aggie players declined to comment.

Anyway, for a couple of weeks after that, the Aggie yell at G. Rollie White was modified to “beat the hell out of Lynn Shortnacy”.

I was at that game too — in the Hogwild band. I remember Shelby Metcalf’'s response was classic — man in agony. And you’re right. Should have been a block with Goff shooting for the win.

Swine, were you at the previously mentioned Texas game? I was a freshman and — foolish — went home that weekend and missed it in person. Game wasn’t televised, either. The only replay was from the game film shown on the Eddie Sutton Show.

U.S. from the elbow? Yeah, sorta. I was in the KATV truck outside Barnhill doing their stats for graphics. Which means it was televised, or I wouldn’t have been out there. Delayed telecast at 10:30? Quite possible. But it was on somewhere.

Must have been on TV. In those days I couldn’t see it from my parents house in Tulsa that weekend. I guess I assumed it wasn’t because I’ve not ever been able to find a clip of that shot.

I found the first half of the game but not the second half.

Lot of beer spilt on that shot where I was at watching the game!

Yeah you wouldn’t have been able to see it in Tulsa. It went to Arkansas only.

Hmm. I’d love to see that shot again. Seems like it ought to be one of the more memorable wins in BKB history, but few people talk about that game much.

I was fortunate to witness that great shot at Barnhill. As normal, we had a great crowd. There was extra electricity in the Barn like whenever we played Texas. This was a classic Eddie Sutton game, well played, lots of time outs by both teams, and just another classic game that went to the wire. U. S Reid’s shot turned that game into one of my all time favorites.

But the best moment was in Charlotte in the championship game. The game was back and forth, with the teams trading the lead throughout the game. With the shot clock winding down, the ball was passed to an open Dwight Stewart. Stewart fumbled the pass but regained control and passed the ball to an open Scotty. I was sitting directly behind Scotty and in line with the goal. As soon as the ball left Scotty’s hand, I knew it was good. That was the loudest fan reaction I have ever heard in a NCAA game.

I appreciate all Hog victories. I believe Muss will lead his team to many more and I can’t wait to see them.

Was it on this board that I read that this game is considered the Big Bang for March Madness?

That day is considered the Big Bang. NBC jumped back and forth from game to game, including ours, which had never been done before. There was K-State beating #2 Oregon State, and St. Joseph’s beating #1 DePaul, and US from half court. All buzzer beaters, all in about five minutes.