A couple of observations from the South Carolina game

Bud Walton will get another facelift soon. Hunter Yurachek promises that. It will be fan friendly as far as loge seating and amenities. If you watch a Houston home game, you get the idea of what’s coming. The seating capacity will be reduced, but there are going to be some lower level loge suites that are spectacular. There are several other projects going on that have to be finished first – like the new baseball clubhouse and the new offices, locker rooms for track in the south end of John McDonnell Track.

Texas Tech floor looks SOOOO much better on television by the contrast chosen and yet it is functionally the same design. Just an impression on television which makes a big first impression. 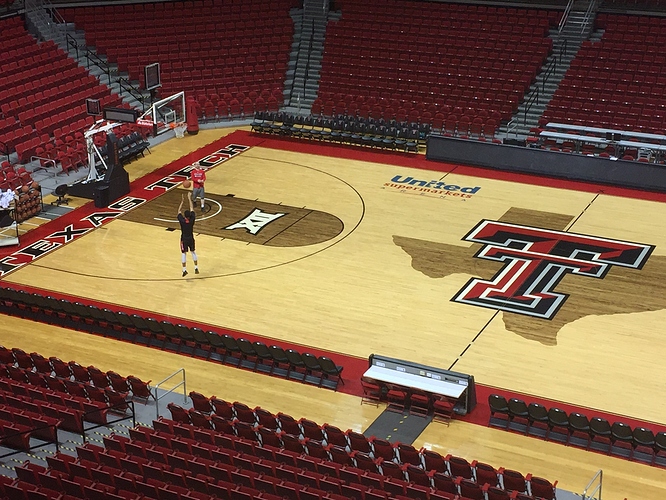 The quality of the photos presented and the angle make this not a fair comparison. Also I am pretty sure that is also not the most current photo of the floor.

While there may be some updates needed to the floor, what you have displayed is not a fair representation.

While there may be some updates needed to the floor, what you have displayed is not a fair representation

I was like “what’s with the block letters for Richardson’s signature and where’s the outline of the state?”

That is not a picture of Nolan Richardson Court. It’s similar but has some things wrong. The state of Arkansas is “underneath” the razorback at central court (similar to the TT court), and Nolan’s signature is included along with a small slobbering hog along the sidelines.

That is not the way the Arkansas court turned out. Not close.

The Nolan Richardson court is nice. It looks great, but is not so decorative to get in the way of the game. Some of these courts are too creative and make the game more difficult to view. They are distracting.