Luke Fickell at Cincinnati is in his third year. He went 4-8 the first year, 11-2 last year, and is 8-1 this season. He was the DC at Ohio State and the interim coach there at the end of the Urban Meyer era. Interestingly for an AAC team, they actually seem to play a little defense. I know nothing about his buyout.

Dave Clawson at Wake Forest is in his fourth HC gig, and has built winners everywhere he’s been(Fordham, Richmond, Ball State and now six years at Wake). One disadvantage would be that he and most of his staff are eastern/northeastern guys, though he has a couple of defensive assistants who’ve coached in Texas and they’ve got three Texans on their roster. No idea on his buyout.

These are two very thoughtful choices. We can pay more than these two athletic departments. They would, however, have to be willing to risk their careers by coming to a depleted cupboard in the SEC West.

Clawson was oc for fuller when Tennessee went down. He knows full well the sec. he may not want that at his age unless the money was so good to turn down

He is a good coach though

Tom Allen is another along those same lines that’s interesting. Indiana was basically the Vandy of the Big 10. 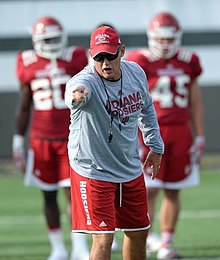 Thomas Allen (born March 14, 1970) is an American college football coach serving as the head coach of the Indiana Hoosiers football team. Allen previously served as the defensive coordinator at Indiana and South Florida. He spent time as an assistant at Ole Miss, Arkansas State, and Drake, among other programs. A native of New Castle, Indiana, Allen also spent six seasons as defensive coordinator and three seasons as the head football coach at Ben Davis High School in Indianapolis. Allen spent ...

Indiana seems to have had at least a mild uptick in recruiting lately, which would be a good sign. I also would not discount Allen’s stock much if Indiana has a couple of more losses down the stretch-they just lost their starting QB to injury. The main knock on Indiana in Allen’s tenure is they just haven’t beaten any one who was very good. A home win over Nebraska is probably their best effort this year. Still winning games at a basketball school in the Power Five is no easy thing, and he certainly has IU going in the right direction.

I would take Tom Allen simply bc of his oc! Prior to that he employed Seth littrell of north Texas fame

Got to be careful with those coaches coming from Conference USA. Look at the backgrounds of current SEC head coaches. What are their backgrounds? How many of them had coached previously in the SEC either as a coordinator or head coach of another SEC school?

Tom Allen is in the big 10 and Indiana is a tough football gig there. Think it is similar to our job

If you gonna look around the sec, well Eddie gran at Kentucky is interesting. Neither guy at Alabama excite me right now

Dave aranda at LSU I would make say no. Incredible attention to detail

No to guys at ole miss.

I’m a fan of Clawson, but he just signed an extension through 2026. Another big buyout. I think that rules him out. He was an OC for TN. He’s also taken over four programs in bad shape (first year was horrible at each, but before he left they were double digit winners). I believe WF this year is 7-2 with three games and a bowl left.

Clawson is just now getting to the tough part of his schedule. So far have not beaten many good teams.

Tom Allen is an outstanding person and coach. My favorite Tom Allen story is that he headed-butted one of his helmeted defensive players while coaching at Ole Miss and made ESPN highlights for it.

The Vandy of the Big 10 is Northwestern, except that Pat Fitzgerald has more or less permanently elevated them above the cellar. But not this year; NU’s record is even worse than ours (1-8). However they won the Big Ten West and a bowl game last year so it was a sudden dip.

Right now Rutgers is the undisputed dregs of the Big Ten and might even be worse than we are.

After flying to Fayetteville to watch this weekend from Ca, I’m almost certain the Hogs are the worst team in the P5…watched it with my own eyes

If money dictates that we go cheap what do you think of Jason Candle at Toledo. He’s managed to have the top recruiting class the last 3 years in the MAC and has a winning record. WPS