5 things to know about Fayetteville Regional

Care to post article here because slot of us cannot read it.

Care to post article here because slot of us cannot read it.

5 things to know about Fayetteville Regional 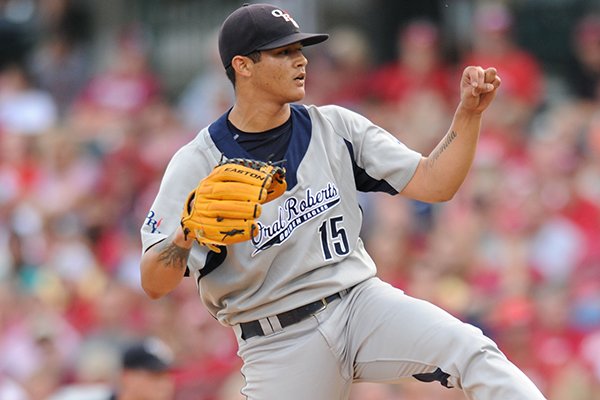 Oral Roberts starter Miguel Ausua delivers to the plate against Arkansas Friday, June 2, 2017, in the fourth inning during the opening round of the NCAA Baseball Regional at Baum Stadium in Fayetteville.

Arkansas is hosting an NCAA regional for the second time in two seasons, but this year’s field has less of a regional feel, geographically speaking.

The three teams - Southern Miss, Dallas Baptist and Oral Roberts - that will accompany Arkansas at Baum Stadium this weekend must travel a combined 986 miles one way, more than twice as much as the three participants - Missouri State, Oklahoma State and Oral Roberts - had to travel last season, roughly 445 miles.

Compare that to last season when all of the teams in the regional had played at least two other teams from the regional field during the regular season. The only regular-season meeting between teams in this year’s regional came March 9-11 when DBU won two of three against ORU in Dallas.

Here are five more things to know about this week’s regional in Fayetteville:

Arkansas will open the NCAA regionals with a game against Oral Roberts for the third time in four seasons.

The Razorbacks defeated the Golden Eagles 8-6 in the opening-game of the 2015 regional at Oklahoma State, and won 3-0 in the opener for both teams in Fayetteville last season. Neither Arkansas did not make the NCAA Tournament in 2016, so this will mark its third consecutive postseason opener against ORU, a private, Christian college located in Tulsa, Okla.

ORU is expected to throw senior left-hander Miguel Ausua (8-1, 3.27 ERA) against the Razorbacks. Ausua pitched the regional opener against Arkansas last season and allowed two runs (one earned) in 6 1/3 innings.

The Golden Eagles (38-18) won the Summit League for the third time in the past four seasons to automatically qualify for the postseason. ORU had the No. 131 RPI in the NCAA this season and No. 266 strength of schedule, according to WarrenNolan.com.

ORU was 3-6 this season against teams that made the NCAA postseason, including 1-2 against Dallas Baptist. The Golden Eagles defeated Oklahoma State twice and had losses to Oklahoma (twice), Missouri State and Purdue.

Once annual rivals, Arkansas and ORU have not played a regular-season game since 2012.

Auburn’s Casey Mize and Florida’s Brady Singer are expected to be the top two pitchers taken in the MLB Draft next month, but statistically no pitcher in college baseball has been better than Southern Miss junior right-hander Nick Sandlin this season.

Sandlin (5-11, 170 pounds) is small for a pitcher and his fastball is in the low 90s, but he throws from a sidearm slot that makes his pitches difficult to pick up. He was an All-American closer for Southern Miss before moving into a starting role this year. He has 20 saves in his career.

Baseball America rates Sandlin the No. 151 prospect in the upcoming draft.

Sandlin won the 2018 Ferris Trophy as the best college baseball player in the state of Mississippi.

Arkansas ranks third in the nation with 84 home runs this season, but the Razorbacks will see at least one team - and possibly two teams - this weekend that are among the nation’s most powerful.

Baum Stadium has been friendly to home run hitters this season, especially to pull-hitting right-handers who will have an upper hand this weekend with winds forecast out of the southwest and blowing out to left field.

The regional will feature a number of the nation’s best hitters.

Dallas Baptist senior infielder Devlin Granberg is third nationally with a .426 average and 100 hits. He also has 65 RBI.

Southern Miss junior infielder Luke Reynolds is ninth nationally with a .400 average and has 60 RBI, which is second on the Golden Eagles’ roster behind the power-hitting Matt Wallner, who has 66 RBI.

DBU junior outfielder Jameson Hannah bats .360 and is projected by Baseball America to be drafted within the first two rounds of next month’s MLB Draft.

In part because of the strong individual numbers, DBU and Southern Miss are among the nation’s best at getting on base. DBU has a .296 batting average and is sixth nationally with 322 walks, while Southern Miss’ average of .304 is 11th nationally and its 309 walks are 12th.

Both of Arkansas’ full-time assistant coaches and its volunteer coach have deep ties to Dallas Baptist.

Arkansas pitching coach Wes Johnson was an assistant at DBU from 2012-15 and Arkansas volunteer coach Craig Parry was an assistant there from 2014-16. With both on staff in 2015, DBU won 46 games and hosted an NCAA regional for the first time.

Arkansas hitting coach Nate Thompson played two seasons at DBU after transferring from a junior college in his home state of Kansas. In 2004, Thompson was an outfielder on DBU’s national championship-winning team in the National Christian Collegiate Athletic Association, or NCCAA. Two years later Thompson was an assistant when the Patriots won another NCCAA title.

Johnson, Thompson and Parry all coached with or for DBU head coach Dan Heefner, who was promoted from an assistant coach prior to the 2008 season. Thompson said earlier this year that he asked Heefner for advice prior to leaving Missouri State for Arkansas last June.

Friday’s game will only be streamed on the ESPN app.

Friday’s game will only be streamed on the ESPN app.