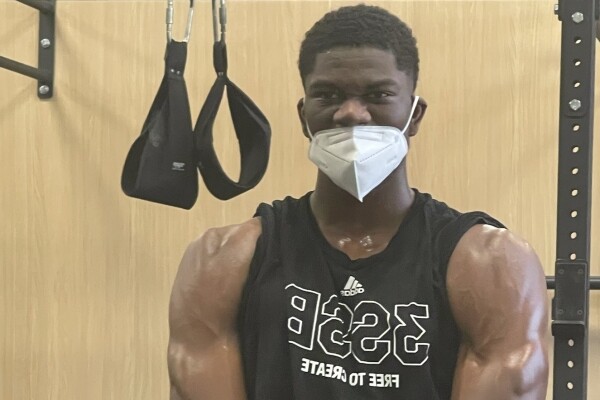 Eric Musselman and his staff’s communication with ESPN 5-star Kijani Wright put the Razorbacks in his top seven schools.

This is scary good… like taking a sleeping Jason mask off.

Darnell Robinson is our biggest recruit from California to date. Any recollection on what was his ranking? Or was his time prior to when they started ranking recruits?

Darnell was a Mickey D All-American in 1993 (his coach on the West team was Rip from Parkview). So he was considered one of the top 22 players in the country that year. He had a double double in their loss to the East. MVPs were Jacque Vaughn and Jerry Stackhouse. The Wiki page on that game says Robinson and Rasheed Wallace were considered the two top prospects in the game. Sheed fouled out with 9 points.

Robinson and Charles O’Bannon were the only players in that game who would leave school with a natty.

Back in the early 90’s, the best recruiting services were the magazines and newsletters that various services had. Bob Gibbons was the most noteworthy and most respected during those days, but you also had Van Coleman, you had Hoop Scoop with Clark Francis, and other magazines like Prep Stars. Darnell was a consensus top 10 player. He kind of varied from top 5 to top 15, but he was a no doubt McDonald’s all American. His class had some good players, the McDonald’s game was in Memphis that year, at the Midsouth Coliseum. Jerry Stackhouse was most people’s choice as the #1 player in the class, but you also had Darnell, Rasheed Wallace, Jacque Vaughn, Jerald Honeycutt and Charles O’Bamnon. Rasheed Wallace was actually rated a little higher than Darnell, but on that day Robinson kind of overpowered him. Wallace fouled out, and Darnell actually moved up to a clear top 5 after the all star games. I was at the game, and any time Darnell did anything good the Hog fans there would start a Hog Call. Really irritated the Memphis fans. We thought at the time we had a really good chance of getting Honeycutt, he was supposedly good friends with Scotty Thurman, so we cheered a lot for him also. Then he went to Tulane

I was there too. Darnell actually frustrated Sheed so much that he picked up 2 techs and was ejected. I really thought we were gonna get Honeycutt, but we already had Corliss.

I text Van. Hopefully he gets back with me.

Unfortunately all my magazine records from 1982-1999 were lost in the crash of my desk top computer only copies I have are in magazine copies which is limited.
Based on memory he was rated between 8-12 nationally… was a McDonalds AA and 2nd team Parade AA