In this column, I get into: 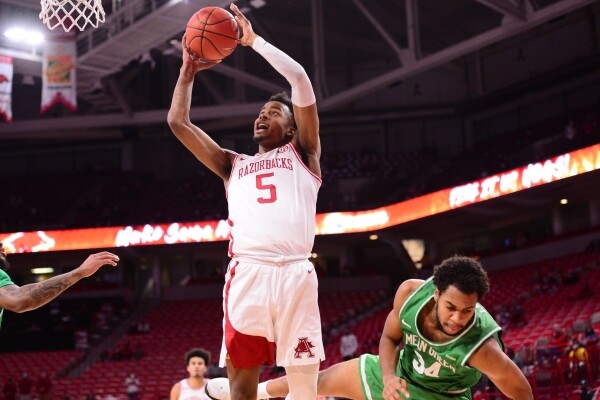 On April 20, Eric Musselman was asked to give a scouting report on Moses Moody, who days before had officially signed with the Razorbacks.

Abmas kid is very good and ORU is a dangerous team watched their game last night with Okl and lost by 14 but missed a ton of wide open 3s,they hit them totally different game. I hope Moody becomes more aggressive ,we need him to get about 15-17 a game.

In what ways do you want him to be more aggressive?

Look for his shot more, have seen him pass up several shots, take the ball to the goal more like Mason did last yrs, draw some fouls, get to the FT line and get some free Pts.

Moody will get more aggressive as he season goes on. He has shown he is fully capable of making plays. The hogs have options and they need to continue to move the ball and take good shots. I’m glad Moody doesn’t force things and let’s the game come to him.

Moody is averaging 16.0 per game now. So he’s scoring right in the middle of Youdaman’s preferred scoring average. I think he will move that up as season goes because his minutes are going to stay high.

Despite his early struggles finishing, he is tied for second on the team with 17 scores at the rim. Desi Sills also has 17 and Justin Smith has 24 on far more attempts than Moody. I’m waiting on Moses to heat up a bit from the left wing (2/11). It’s about the only area of the floor he’s not been solid shooting the ball. He’s been killing it in the corners and I love that.

Well that would be his average, so I feel good about that request.

We don’t need more offense. Why is that the thought here?

Thanks for pointing all of these things out. Its as if someone people don’t watch the games. Like really watch them and then review the stats. Glad you are here to do that work for them. Then again, people complain about Labron.

I am talking about off to start the game, can’t afford to get down big early with the competition about to get much tougher once we start conference play.
I was just thinking if we had notae and moody in the lineup it was balance out the outside scoring and allow Moody to not feel the pressure he has to score, time will tell how the current lineup once we start conference.

So do you want Notae in the game or Moody to be more aggressive? What about the bench? I don’t mean to be rude, but I’m just not seeing that Moody needs to do anything differently. He’s a stud that’s leading our team in scoring, fantastic rebounder, extremely patient, and really doesn’t need to do anything more at the risk of turning the ball over or excluding the team chemistry. And until Notae can do something other than shoot and pass, he needs to come off the bench. What does it say to Sills to bench him? what does it say to the rest of the team that he’s preaching defense, defense, defense. The first player to start should be and is sills, then smith, then tate. That is never changing unless desi starts playing like Notae.

I think moody could attack the rim more like Mason did last yrs… I know Muss values defense and we will see if we can generate enough offense with the current 5,if not,rest assured, there will be changes made to get more offense in the game. I’m totally fine with Notae off the bench if we can get enough scoring out of the current starting 5

What stat do you have that says he isn’t attacking it as much as Mason? Our offense isn’t going to run through him like it did Mason. But % wise with the shots he does take, they’ll be just the same in the paint and at the line. He’s not going ot play like Notae and take a guy off the dribble and drive and try to get a foul like Mason. He will sometimes, but not every possession like Mason did. It’s just not the same offense. And like Mason, that’s really on Notae can do, which is why he’s coming off the bench. THis is a better team. Forget what you saw last year. It aint the philosophy.

I don’t think anyone could attack the rim as much as Mason did last year. The ball was in his hands the entire game. I don’t think you will see anyone with the ball that much because of the balance on this team. But I like the idea of Moses getting to the foul line. He is a good foul shooter.

Just from watching the games

Agree completely. He’s going to get half of him points from the line. And that’s what Muss wants. He wants to get to the line as much as possible, and on this team, that’s going to be Moody, Smith and Sills, primarily. Probably in that order.

Does that mean every time he has the ball in hands like Mason? He’s not like Joe. If he he thinks he can take his guy, he will. But he also hangs out in the paint as much as he does on the perimeter.