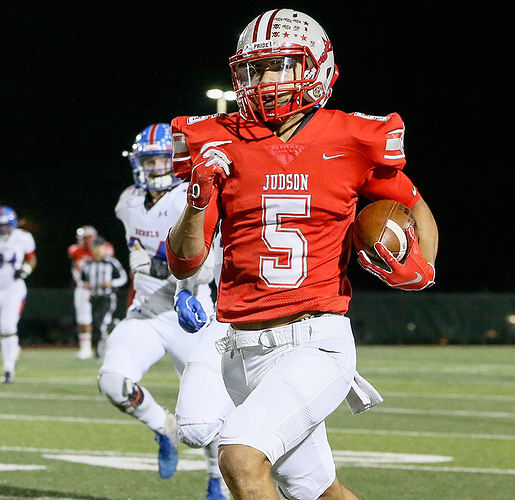 we have great potential at QB for the future

Let’s win a few games so we keep these guys.

His mother loves Pittman. She said he’s brutally honest and she loves that.

She feels totally comfortable in sending Lucas to Fayetteville in Jan.

Lucas and other commits have been in a group text and are trying to get others on board.

Not only a very good QB but a very bright kid who skipped a grade. Just 16 years old now.

Very solid pickup with a lot of upside for getting even better and maybe grow some more considering he is young for his classification after skipping grade!

One thing I learned over the years as a manager of a large sales team is 100% honesty dealing with your people. By that I mean telling them exactly where they excel and areas they need to improve. And it starts in the interview process. People want to know the good and bad in every position. In the sales world it’s easy to tell everyone they are wonderful to keep them pumped up. But folks ultimately respect you when you give them honest, kind feedback. As mentioned here, Brutal Honesty.

He looked like a man among boys running the football with much greater quickness and speed than those chasing him. He did not throw a frozen rope but his accuracy on long balls was very good and he seemed to know how to throw his receiver open, throwing to a spot where the covered receiver could break to it and make the catch. He looks like someone Briles can really work well with. Good recruit! Get more!

This young man seems to have the talent and attitude to make a big splash in a couple years… love the mobility.

I missed it, but I heard he was impressive on a radio interview this morning.

Looks like a good prospect, student of the game

Our risk with Sam is that he’s never been an SEC HC. On the other hand, he’s been a proven successful builder of offensive lines…at several programs. That tells me he can work with people, and knows what he’s doing. He’ll learn a lot this first year about being a HC, with virtually no pressure. Year 2 just might be good.