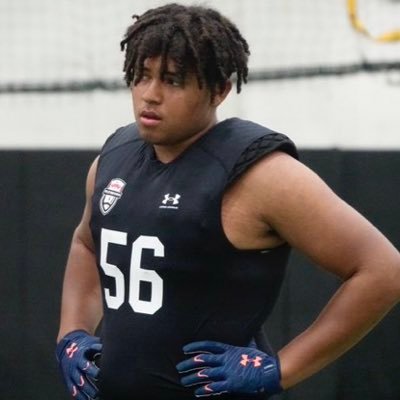 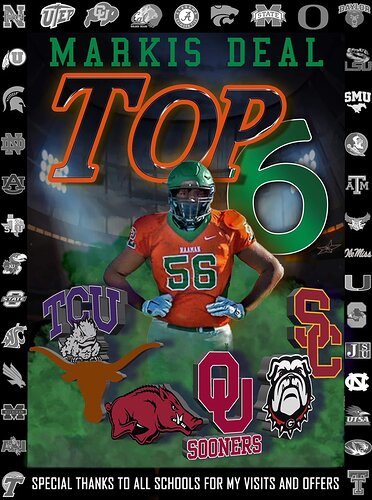 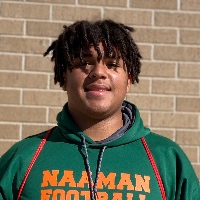 Markis Deal is a IOL from Naaman Forest in Garland, TX.

What makes you think Texas is the favorite?

At least one person who covers recruiting thought we were getting Deal until the NIL was not an up-front “deal.” We did our usual, thorough discussion of NIL and the recruit was told, off-campus but on a visit at UT, that he’d be compensated earlier (and better) at UT.

A lot of people get up in arms about NIL when a DT is not going to have the splash cash that a QB will have. And, some of it is unchanged, simply “coming out of the shadows” from where it operated for decades before.

Texas is going to make you pay/work to get a coveted recruit out from under their noses.

A bidding war few can or will win if Texas absolutely wants a given player in the state, unless family or other ties outweigh money.

We are in the top 6 for Markis, so he hasn’t ruled us out of the decision yet. We are giving him the opportunity to play DT instead of offense. I am not sure how many of the 6 will let him play DT but they might all tell him they will.
Texas might be the favorite but until he tells the Hogs no, i am holding out hope that Sam and company will sway him to be a Hog. Maybe our NIL package gets good enough or maybe the longhorns suck again this fall and he decides he wants to be in Fayetteville.

The opportunity to play DL cannot be overstated. In the end, a school would be foolish to tell him “no” while being recruited…unless that costs the school another recruit at the “not really” position (DL in this case).

I know Deal is a player that you don’t turn down if he wants to come, but at least we’ve got commitments from a couple big guys to play DT/NG.

I will say something at the right time.

Wish most of us, me included, had that skill!

Now that is interesting