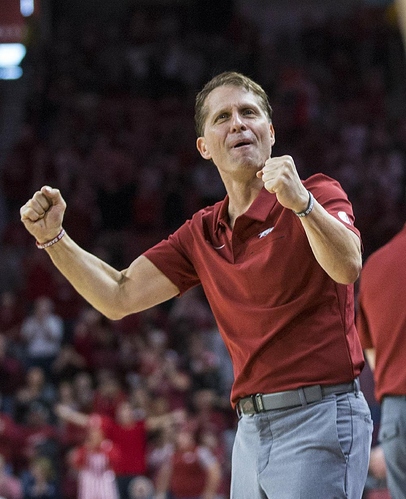 While 3 of the 4 Arkansas signees dropped in the latest ESPN basketball rankings, the Razorbacks' class moved up one spot to No. 5.

I wonder, Did that drop the class ranking?

Just added story. They went from 6th to 5th.

Michigan dropped out of Top 5 because top signee 5 star Isaiah Todd decided to go to
G League, allowing Hogs to move up one.

247 Sports Composite Ranking which is the average of multiple services is:

They show KK and Williams moving up since the last ranking, while Davis falling significantly.

For Team Rankings, they show Arkansas class at #6. They have LSU ahead of Arkansas at #5 while ESPN has LSU at #13.

amazing that even in basketball our signees drop down in the rankings,but if they had signed with Duke;Kentucky;or another "blue blood"they would improve…really surprised the class rose up

I guess I look at this differently, and see the rankings as more a beauty contest. If the coaches got the players they wanted, then whether we rank 5 or 9 or whatever seems not that important. As long as they produce on the court and we are attractive to good players and get our share of them, seems it will work out.

I guess I look at this differently,

I agree with you. And another way to look at this class is it was one of the best classes of Arkansas kids (including 2 who played out of state). We got all but one, Chris Moore.

Before I got to see a year of CEM’s coaching and system, I thought Moore was the most important of the class. As good as I still think he’s going to be, he probably was not as good a fit for CEM’s system as the 4 we signed. IMO, this class is going to be the springboard in bringing Razorback basketball back to a National power. It may be a year or 2 away, but this class provides a great base to build on.

Something to remember, Kentucky, NC and Duke signed six prospects vs four for the Hogs. Tennessee and Auburn also signed four.

Richard, isn’t the class ranking based on average star rating? So should it matter how many recruits a school signs?

I hope you are right about Chris not being a good fit. I always thought he was the best of the 2020 class. His work ethic is better than any of our signees.

Richard, isn’t the class ranking based on average star rating? So should it matter how many recruits a school signs?

I do find it strange to adjust rankings now, since no one on playing, etc. Why change a ranking of a player now? What changed to make a service change the players ranking?

I hope you are right about Chris not being a good fit.

What seems to be 2 of the most important things CEM looks for in a recruit/transfer? IMO, it’s length and 3-point shooting at all 5 spots. Those 2 “wants” don’t fit Chris. I didn’t say “Chris is not a good fit”. I said he didn’t appear to be “as good” a fit as the other 4 players for CEM 's system. Not that it entered into my thoughts, but Chris is also the lowest ranked of the 5 on 247 composite at #123 and a 3-star.

I think CEM would loved to have signed Chris. I don’t think, if it was a numbers game, that he would have given up any of the 4 who signed in order to make room for Chris. He might have traded for Devo or KK, if he knew at that time, he had the other one for certain, since they are both PGs.

I think Chris is a terrific basketball player. He brings toughness on the boards and good post moves. He’s certainly a “tweener” at his position, but so was Corliss (not saying he will be anywhere nearly as good as Corliss). I fear he’s going to wear us out every time we play Auburn.

Other sites do total points. I assume ESPN does the same.

Richard, isn’t the class ranking based on average star rating?

By the way, if they used only the average, AZ St would move from #34 to #1 by virtue of having one 4 star signed and a top 10 player committed, but not signed. That probably explains why they don’t use “average” to do the overall final team rankings.

Thanks for the clarification. I don’t know why it was average with a minimum of three recruits. Too much information overload, I guess.

It’s ridiculous to assert that Moore’s work ethic is better than the kids we signed. Pretty sure every one of them has worked their asses off for years to get to where they are. Moses and KK even left their families to get better.

His motor would probably be the best. I think KK’s motor is definitely up there too.

That is what was said of Chris during his recruitment process. Whenever they talked about Chris, work ethic is what was mentioned.

That is not a knock against Moody, KK and Davis. This doesn’t mean they don’t have good work ethic. It is just that when they mentioned Chris, they always talked about his work ethic and how hard he plays.

I know you think it is about Muss and Anderson. It is about I telling Harley that it is not necessarily good to have not signed Chris and he correctly pointing out why Chris doesn’t fit the system.