24 Points in a Quarter in SEC Play? Record?

If this has been covered elsewhere, please just link me to the post. Question: Has Arkansas ever scored 24 or more points in a single quarter in SEC play until this game?

We put up 28 in the first quarter against Kentucky in 2012. Not sure there were others, so I answered my own question…

The highest-scoring quarters I can remember in SEC games are the first quarter vs. Kentucky in 2012 (28), the second quarter at Mississippi State in 2016 (24) and the third quarter the other night.

The most I can remember Arkansas giving up in a quarter was 35 at Tennessee in 2000.

I was at that TN game in 2000. It was a bad night for the Hogs. I left pretty upset with Fulmer for keeping his starters in on offense near the end. It backfired for him because his best OL guy got hurt in the later minutes. He was out for several games the best I can remember.

It’s a great model of a solid 4 quarter pace of points we should be shooting for. Not quite 100 point pace, but something we can work with.

The idea is to score a bunch early and then allow your reserves to play a lot in the second half. Whether or not they score a bunch is not important to me.

There have been eight SEC games that Arkansas scored 24 or more in a quarter. Here is a rundown: 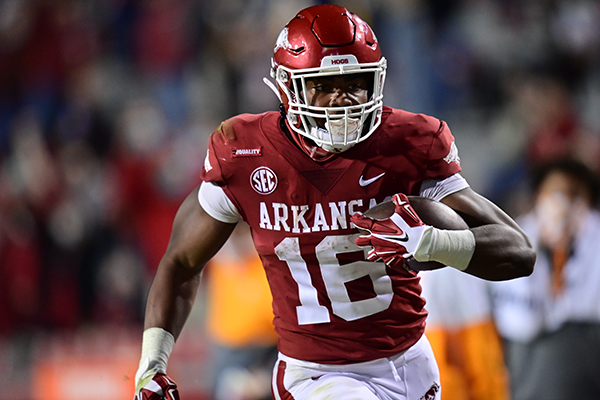 Hogs' 24-point quarters have been few

Arkansas’ 24-point third quarter against Tennessee on Saturday was tied for the Razorbacks’ fourth-highest-scoring quarter in an SEC game.

That’s a group Tennessee won’t be happy to be associated with.