heard the UA will play ASU in Little Rock in 2025. I do not know if we’ll split the gate with them or if they’ll get to be the home team. I’m sure HY feels this is good for the state and will help the ASU budget. It’ll do wonders for football excitement in Little Rock & create a wonderful rivalry. Henderson v Ouachita, UCA v. Ark Tech, Ark v. Ark St. All big games. Probably statewide TV. Great publicity for us in Central Arkansas. (Note: heavy sarcasm)

Not a rivalry, in my opinion. I don’t think it should be played, but it looks more and more inevitable that it will happen.

I’m hoping it’s just a rumor that has no basis in fact, but my source is pretty reliable.

Even if we’re going to do it, why in the world would we elevate them to our status & play it in LR? Why not treat them like a rent-a-win & play in RRS? If the claim about a sellout is important, why not play it in a 75k seat stadium where we’d get all the money?

This makes no sense to me. I’m not going to waste any more on donations, though. If this is the AD’s idea of making money, he obviously doesn’t need mine.

Why not treat them like a rent-a-win & play in RRS?

Perhaps to keep them from demanding a return game in East Arkansas.

yeah, & it sounds like HY is sensitive to their demands.

So no more Mizzou games in Little Rock?

Sometimes city/state/county deals are in the works that doesn’t require fan input. Sometimes, sometimes not. Then there are plans formed on the basis of money, period. Prime choice to just roll with the flow that week-end or go hunting. WPS!

Not a big deal. This will be a rent-a-win game. It will be interesting to see how much ASU gets paid - probably like an La directional. I can see why they put this in Little Rock. Attendance in Little Rock has left something to be desired for some time now. Central/East/South Arkansas UA fans haven’t held up their end of the bargain in showing up. ASU fans will ensure a sellout (for a change).

ASU can say goodbye to Razorback fans ever cheering for them after this. I think they will lose significant support over it.

ASU has very little support to start with. This could be the beginning of the end for Hunter Yurachek if he is the one to make this happen.

I would hope HY is not concerned with asu’s budget.

Jeff Long may not have “gotten Arkansas” but he knew enough not to schedule Jonesboro Tech.

I would hope if this does happen it would be one time only; “OK, we played you, now go away.” But I’m not highly optimistic about that.

We have it confirmed. This is part of a larger agreement that should move the Missouri game back to campus this year and in 2023. 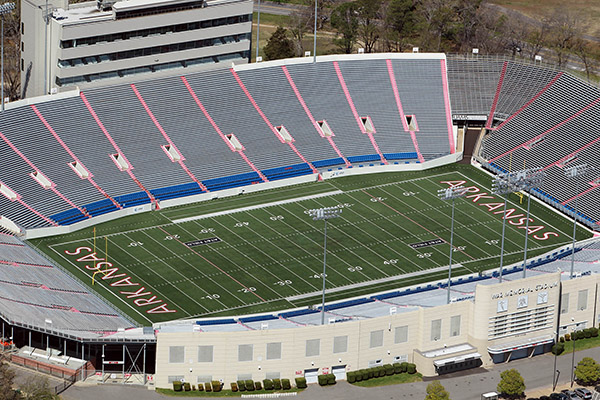 The University of Arkansas and state officials are expected to announce today major changes to the school’s football scheduling in Little Rock.

Likely in minority, but I don’t like this for the UA at all.

If ASU or in state schools need the money then give it to them.

Playing them and risk of loss does not enhance our program nationally.

Not sure many UA fans feel anything in victory other than a relief or whatever.

Would rather us concentrate on what’s best for national profile of the program and really playing for titles, than taking time and making our flagship program play in state schools or help keep an old stadium on life support alive longer.

I know we play other schools from ASU and UAPB conference but doesn’t risk losing in our own backyard to home state schools and embarrassing ourselves or potentially risking market share in our state or while spending time elevating profile of state schools.,

It’s like some want us spend time being in an Arkansas Intercollegiate Conference.

I’ll speculate that HY didn’t have much choice. But that’s just me.

I’ll speculate that HY didn’t have much choice. But that’s just me.

That’s possible, but I doubt it.

Regardless, I still think it’s an absolutely terrible idea. I’ll be curious to find out what the arrangements for the game are. If it’s a split gate or something like that, I’ll be furious.

Funny thing is, all the people talking about how big a game it would be & how many fans would attend, it seems absolutely stupid to play it in Little Rock with 55,000 fans instead of RRS and 75,000.

Part of the Razorback fan base on Hogs & ASU playing. https://t.co/lWIEYX5szK

This reminds me of national politics…No reason for idiotic decisions like this other than to keep a few people happy. WMS is the smallest, worst stadium in the entire SEC. Everyone else learned years ago to play all home games at their campus stadium (other than a trip to a beautiful NFL stadium when the opportunity arises). As the Georgia fans sitting around me said in the 2014 game, why in the world do you schedule games here? My answer was - I don’t know but it will be ending soon. Wrong!