Is it just me, or does our non-conference schedule seem a bit easier than it has in past seasons?

We have that Round Rock Classic with IU, Stanford, and UL. But that’s about it, it seems…

Illinois State who we open up with is no cupcake they are very solid program who could be dangerous. But you’re right there are a lot of cupcakes for us to eat which will be good because the SEC West this year will be tougher than ever

Hard to get teams to come to Fayetteville right now and that may not change.

Because of the cost to travel here?

No because they don’t want to get swept three games by lopsided scores.

That’s fair, I just knew that NWA is not always the most economical place to visit.

It is difficult to get teams to travel to Fayetteville for midweek games once the weather begins to warm. Northern teams have to travel in February and some of March. They can’t get onto the fields due to snow in a lot of instances, so you’ll see some go on a three-week road trip to begin the season. Then they spend a lot of April and May trying to hit a threshold of home games.

In addition, many don’t want to take a long trip once conference play starts. An all-night drive home Wednesday might affect how the team plays in a conference series opener Friday.

That’s one of the reasons Dave Van Horn was happy to be able to schedule in-state teams. They are able to play some home games early in the season and aren’t opposed to the relatively short drive to Fayetteville in the midweek in April or May. The Razorbacks will play five home games against Arkansas State, UALR, UAPB and UCA between March 29 and April 20. The only other nonconference team that will come here after the start of April is Missouri State, two hours away.

The nonconference home games before then are against Illinois State, Omaha, Southeastern Louisiana, Illinois-Chicago and Grambling. Three of those teams fit the cold-weather description.

I don’t think this year’s nonconference schedule is much different than the ones Van Horn typically assembles. Last year was an anomaly. The College Baseball Showdown wanted to make a splash with the teams it invited for its first year, and Louisiana Tech had one of its best teams in program history.

Arkansas spent two nonconference weekends on the road last year because the NCAA Indoor meet was being held at the Tyson Center next to the baseball stadium. The last time there were baseball games at the same time as the NCAA meet, there were some parking and, I think, staffing issues. 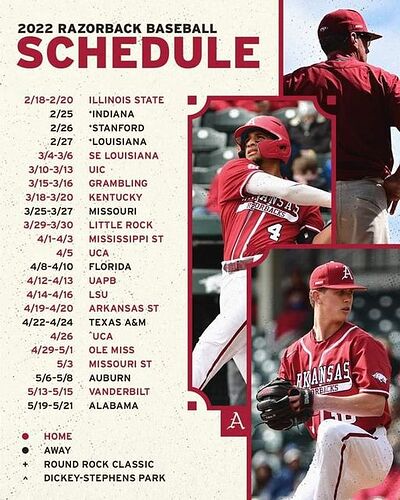