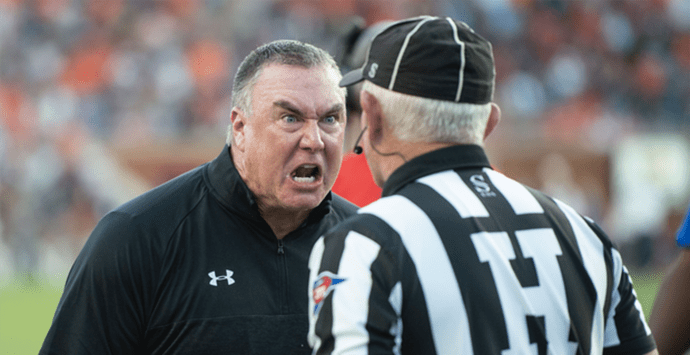 The new rule regarding the penalty for defensive holding is being taken seriously at Clemson. Their DB’s are practicing with boxing gloves.

Can’t find any confirmation about another rule change regarding recruits at off-campus sites. Jacksonville, FL newspapers are reporting that recruits on official visits will attend the GA/FL game this year for the first time. That limitation has been a big drawback for the Hawgs playing at WMS for many years. Can’t find anything on the subject at NCAA.

Jacksonville, FL newspapers are reporting that recruits on official visits will attend the GA/FL game this year for the first time.

I posted a separate thread on that. It’s unclear if it’s official visits or if they’re just able to give recruits tickets for an unofficial visit for whoever is the home team that year (this year it’s Georgia). My understanding is that you can’t do official visits off campus at any time, but that could be wrong.

I’ll ask a GA alum I know what’s going on. Surely it has been discussed on Dawg message boards.

On the official rule changes, NCAA clearly punted the flopping problem down the road. Antebellums in Oxford will get to flop…then write a report. That’s harsh.

Sorry. Didn’t see the original post and can’t locate the discussion now.
I tend to tune out during SEC Media Days. Always seems like a lot of very uncomfortable coaches at a “coach speak” marathon. I would have been interested, however, in the rule change topic.

A copy of the 2022 NCAA rule book is available here…

Very disappointed that I don’t see anything in the fake injuries process to change a thing. A team fakes injuries and the opposing team or the conference appeals to the national ref. So they say yes it appears he faked an injury on that play. And the conference says you are hereby fined $10k or you’re on double-secret probation or whatever. If it’s not a penalty at the time and place of the infraction, the guilty team benefits from their strategy and will take the slap on the wrist. This is one area that really pisses me off because scumbags are the ones that use it and this will not effect their discovered loophole at all. Lane and Drink are laughing their heads off at this.

Can’t find any confirmation about another rule change regarding recruits at off-campus sites. Jacksonville, FL newspapers are reporting that recruits on official visits will attend the GA/FL game this year for the first time.

There is not an NCAA rule that prohibits having recruits at off-campus sites. From what I understand, Georgia-Florida had agreed not to have them in Jacksonville previously. That is what is changing this year.