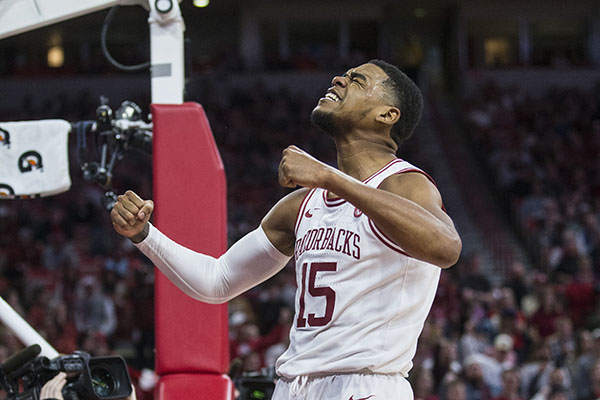 Interesting you mentioned Mason not hitting enough threes from the corner. In fact I can’t recall any. That is partly because Mason was mostly initiating and creating offense rather than being recipient of an assist. It is rather hard to create a three pointer from the corner.

I think Muss putting the ball in Mason’s hands and let him create offense was the biggest difference between last season and this. Mason thrived on that. It kind of reminded me off how Derek Fisher and Kobe operated for the Lakers. Derek was the PG on paper, but all he did was bring the ball up, hand it to Kobe, go to the corner and wait for Kobe to create offense and maybe pass it to him for a wide open three. Mason was Razorbacks’ Kobe Bryant on offense.

That is partly because Mason was mostly initiating and creating offense rather than being recipient of an assist.

Agreed. That’s essentially what I wrote.

Yes. I was reinforcing what you wrote. Waiting eagerly reviews of Chaney and Harris.

Chaney will be coming on Wednesday, I believe. I wrote down the order of reviews, but I can’t find it now lol