Broke down what I thought were Sills’ strengths and weaknesses as a sophomore. SEC home and away stats, plus his best and worst month of the season, and more analysis: 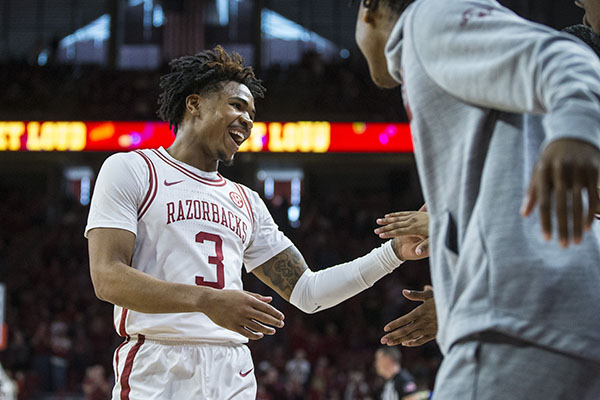 Part one in a nine-part series reviewing Arkansas basketball in 2019-20 takes a look at Desi Sills' sophomore season.

Here is Desi Sills’ season shooting chart by area of the floor: 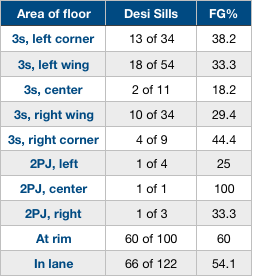 Here is Desi Sills’ season shooting chart by area of the floor:

Would you mind adding a third column on your table, so I don’t have to do the math in my head?

For sure. Give me one second and I’ll add a percentages column

EDIT: The photo above has been updated.

Great opening review article. You have set up a great baseline to review rest of the team,

Only two points I wanted to add.

It seemed on the 3, Sills had to receive the ball when his feet was set to make the three. He was almost money on those shots. On the other hand I don’t think he made any or more than one or two when his feet were not set.

Next year, it is too much to expect Desi to shoot a three off the dribble like Jones or Joe. But I think he can work on shooting a three coming off a screen and become much more of a productive three point shooter.

As you correctly showed his percentage of finishing at the rim wasn’t above average. But I believe he took a lot more difficult shots at the rim than anyone other than Jones. On the positive side, other than Jones he was the only guard who drove the lane to break down the defense. Even Whitt did not do as much of that. Maybe when you do season review on Whitt, that stat will prove me wrong.

A lot of good points on Desi’s evaluation. The one part that is missing is his defense. He’s aggressive against the ball, but also to his detriment as he gets caught watching the ball too much and as a result loses his man as he cuts away from him. It also hurts him on the defensive boards as he never screens out his man, but rather just goes to where he thinks the ball is going and his man gets to pursue the rebound impeded.
Desi hit a lot of big shots at home, but is not nearly as consistent on the road.