This should be really cool. They are replaying the entire game while having live comments from Corliss and Scottie. This channel is the ABC affiliate in Central Arkansas. Don’t know if the affiliate stations in Fayetteville, or elsewhere in Arkansas, are televising it.

Just for info, my guide (ATT U-Verse) is showing it on tonight and Toy Story 2 tomorrow night, but that is wrong. Channel news at 6:00 announced it would be on Wednesday night.

Dangit!! I got every local channel in Little Rock on amazon Firestick except that one.

It is supposed to stream on KATV’s website, too.

Yeah, same on my guide still this morning. Channel 7 verified it again on their morning show. Tonight at 7.

On You Tube, plays on Demand. 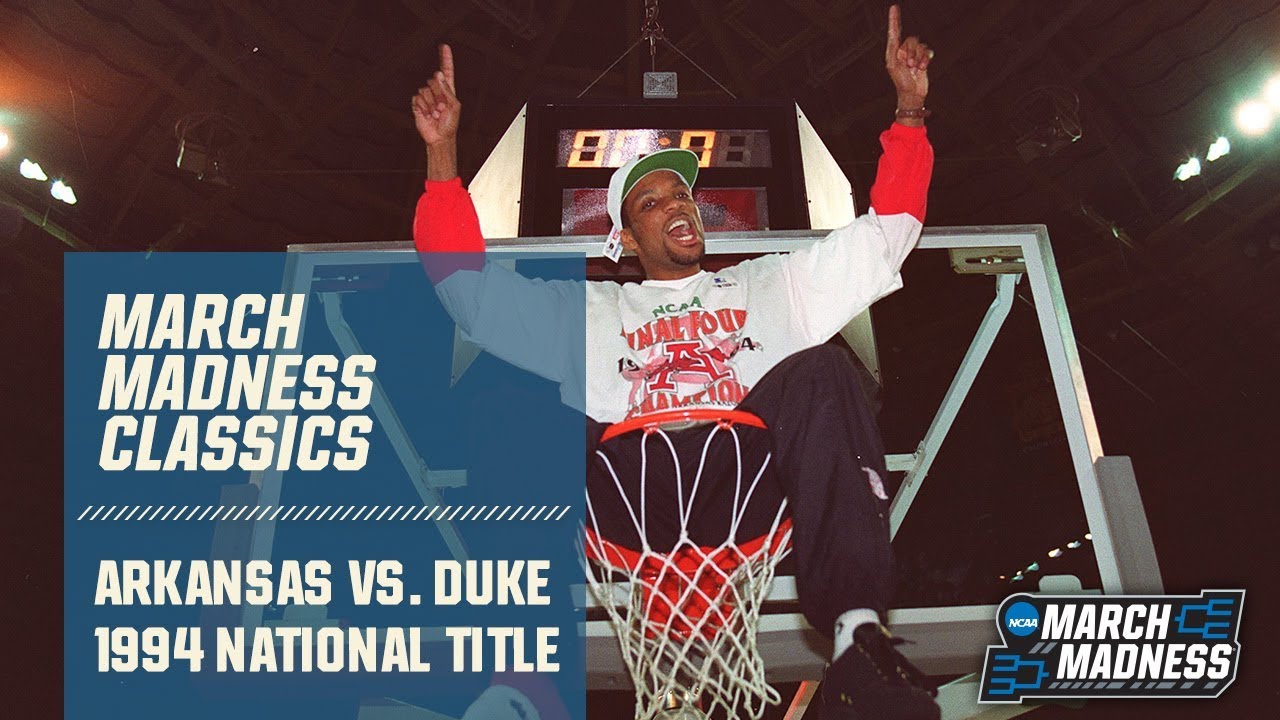 So much fun to watch it again!!!

I’ve watched the game several times but hadn’t realized that Scotty had been 0-4 from basically the same spot that he hit the game winner with barely a minute left on the game clock. It was fun to hear Corliss tease him on each of the first four attempts.

We’ll be forever thankful that Scotty didn’t hesitate to try one more time!

With all the bad luck Arkansas has had, I was sure that the shot wouldn’t go in,

Every time (and that’s a lot of times) I watch that game, something different stands out to me. I’ve always realized this was a really good defensive team, even though they had lots of high scoring games.

There were multiple times in that game where our half court defense was so good, that Duke couldn’t even find anyone to pass to, let alone get off an open shot. I think that was what separated this team from Nolan’s, perhaps more talented, 1989-91 teams. That half-court defense was what fueled our comeback from the 10 point deficit. Corey Beck was nothing short of magnificent in that game!

Watching that '94 team play all-out half court defense last night gives me hope that Muss is really going to bring us back to National prominence again with his emphasis on defense. Now, he needs to find a Corliss and a Corey. Who knows, they may already be on campus or in our recruiting pipe-line.

It takes players to play good half court defense. Every coach knows how to do it. There are books written about it. There are no secrets.

Having Robinson, Wilson, Corliss and Stewart guard the inside and guards like Beck and McDaniel to play defense on the wing is what did it.

Nolan was not able to get that kind of group of inside players late in his career. Maybe one or two but not a collection, Anderson never did. He had guards bit not the front court players. Muss didn’t in his first year. I don’t think he has it for year two either. I don’t see any physical presence like the Championship group of 4, Hopefully in the future,

I have said for years that Robinson and Wilson were the unsung heroes of that team. No, they weren’t the stars of the team, but they could keep the other team’s big man from killing us. Anything they scored was just a bonus. They had 10 fouls between them to give up.

As is the case in just about any championship team, it took all the pieces. We don’t win it all with out Corliss, without Scotty, without Beck, etc. But I don’t think we win it all without both Robinson and Wilson. Maybe with just one of them would have been enough, but having two? Nice.

Tony Bennett, the coachat VA, is a great example of a great coach who won a National Championship without a roster full of 5-star players. He’s created a team, for several years now, that no team in the ACC wants to play because they have to work so hard on the offensive end to get off an open shot. Maybe he read those books you mentioned.

Based on last year and his years at Nevada, I think Muss is, or can be, the type of Coach Tony has become. At Nevada, Muss sat a freshman 5-star who didn’t buy into, or put forth maximum effort, on the defensive end. I think last years’ undermanned Hog team played as hard and smart on the defensive end as any Hog team since Nolan’s best teams.

Now, CEM needs to recruit the same caliber of players Tony has had these last 3 or 4 years. That means he needs to continue to upgrade recruiting. I think his 2000 recruiting class and transfers reflect that he’s on his way to doing that. Hopefully, we’ll get to see first hand how that’s going this season. Provided we get to have a basketball season.