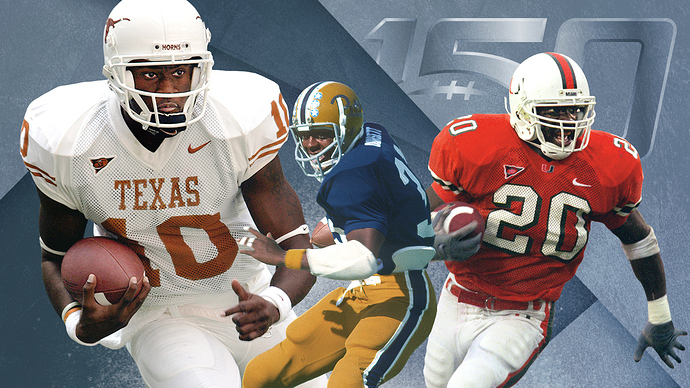 The best single-season teams ever, ranked by a panel of 150 media members, athletic administrators and former players and coaches.

I have them rated quite a bit higher than that. And, I don’t seem to have any Longhorn teams in my top 150. Hmm.

Actually I think Holtz’s team that beat Oklahoma badly was the best Hog team ever.
But the 64 team should be ranked higher.

I agree with that.

There were some things that the 65 and 69 teams did better than 64. But the 1964 team won them all and was extremely tough on defense. Ken Hatfield’s ability to return punts was huge, too. I know I’m stating the obvious, but the intangibles from all of those leaders in 64 is just amazing. To see what all of them did in life is incredible. So I’m going with 64.

I agree going undefeated is something in itself. And the 64 team beat Nebraska who at the time was a powerhouse.

One of my fly fishing friends is a Nebraska guy. Did not go to school there. Went to West Point and was an Army Ranger. He’s from a little town in west Nebraska. His family has had 10 season tickets for 50 years. He’s not going to ever give them up.

That dude likes to talk about Nebraska football and he is respectful of the 1964 Arkansas team. Knows the details of the game, although he was only 12. He also loved it when I wrote a column on Turner Gill. He can give you Turner’s stats and he’s right. That’s his football idol.

There were some things that the 65 and 69 teams did better than 64. But the 1964 team won them all and was extremely tough on defense.

And that '64 team pitched 5 shutouts.

That was five straight to finish the regular season as I remember!

I was pleasantly surprised they didn’t have the 1964 Bama team, that claimed the AP and UPI National Championship in 1964, ranked ahead of our Hogs. They were ranked, but in the 140s. The Hogs should be ranked higher. They were one of the all time great defensive teams.