I don’t remember, is that blowing in, out, or sideways at the park?

It is blowing straight in from center field, like last night.

The stadium is oriented northwest to southeast

So if wind is coming FROM SSE, it’s blowing in

And Slavens hit it 436 into the teeth of that wind

Hadn’t thought about SCUD in a long time. Wasn’t there a war reporter who became known as the SCUD Stud?

Yes. That Omaha stadium is oriented just like Baum. 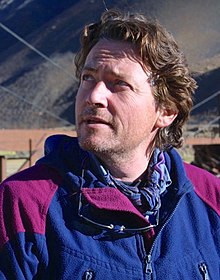 Arthur Kent (born December 27, 1953) is a Canadian television journalist and author. He rose to international prominence during the 1991 Persian Gulf War during which he acquired the nickname "The Scud Stud". He is the brother of Canada's former Minister of the Environment Peter Kent. Kent was born in Medicine Hat, Alberta. His father, Arthur Parker Kent, worked for Southam Newspaper Group and retired as associate editor of the Calgary Herald. After his father's retirement, Arthur Kent began hi...