While I hate the idea, I’ve reconciled myself to it. However, I don’t like giving an automatic bid to 6 conference champions. That might slow the expansion of conferences, but it also means a champion of a very lesser conference beats out a team maybe tied for 2d in the SEC or BIG.

Actually I liked when the world series was the two champs playing each other.
I disike the divisional playffs etc. but realize times have changed.

In football I would prefer 8 conferences and the champs play out for the overall championship.

I do not think that is possible and TV will continue to dictate collegiate sports.

I don’t think that’s a valid concern, Chip. With six at-large teams, there’s a very good chance of the SEC getting three or more, counting the conference champ. Look at last year: We would have had Georgia, Bama and the Flopnecks.

Who should be worried is a league with divisions whose weaker division winner somehow manages to win the CCG. Such as the ACC. I think divisions are going away anyway, but this provides further incentive.

There are 10 FBS leagues, the Power 5 and the others. As long as the Power 5 all survive, in most cases they’re all going to qualify (they would have last year, even though Clemson stumbled), plus one Group of Five team (last year Cincy). In the weirdness that was 2020 (which is probably as weird as it will ever get), the SEC would have gotten four (Bama, A&M, Florida and Georgia), but Cincy and Coastal Carolina also get in. The Power 5 loser was the P-12; USC was the highest ranked at #17.

We would have had Georgia, Bama and the Flopnecks

BUT, with what they showed on ESPN last night, only one of those three teams would have made the Championship game. If they’re going to do this they need to put conference opponents on opposite sides of the bracket.

The one they showed that I saw, Bama and GA would have played in the EE, and the winner may have played Ole Miss (if they won) in the semi final. That’s basically a two week SEC gauntlet after playing the season SEC gauntlet and only one would realistically have a chance at a title. However, if GA and Bama were on opposite sides of the bracket, we still have an all SEC title game, and quite possibly a three SEC team FF.

I know some like the expansion, some don’t, but some of these conference champs, may not even be in the Top 12 and we still have the same argument

The one they showed that I saw, Bama and GA would have played in the EE, and the winner may have played Ole Miss (if they won) in the semi final.

I didn’t see that, but it doesn’t make sense. Here’s how it should go:

Which if you plug in the final CFP rankings:
ND vs. Pitt, Ohio State vs Utah (who played anyway in the Rose Bowl), Baylor vs. Sparty, Flopnecks vs. Okie Lite.
Assuming all the higher seeds win, you then have Bama vs Flopnecks, Meechigan vs. Bayluh, Georgia vs. Suckeyes, Cincy vs. ND (again).
Then the semis, assuming chalk wins, would be Bama vs Cincy and Meechigan vs. Georgia, just like we actually had.

There is no way the 1 seed can play the 3 seed in the round of 8. I could see a format where they reseed after the first round so that 1 doesn’t have a tougher game than 2 or 3, but that reseeding wouldn’t put Bama vs. Georgia under any circumstances.

It’s because only the conference champs got a bye. Not the Top 4

The way they had it GA played first round against lowest seed, Bama had Top overall seed, so they were up next for the lowest seed. Obviously, GA would have won. Ole Miss was in the same bracket and would have faced the winner of GA/Bama in the FF. Don’t know how they figured the seeding, but how they showed the graphic

Still no way Bama plays Georgia in round 2 unless Georgia somehow gets dropped to #8 and that can’t happen.

They only gave 4 teams a bye. Again, I agree it was weird. They also talked about possibly having a PAC 12 champ not being in the Top 12, and not getting in. Which goes against what’s being reported about conference champs getting in.

And I agree it didn’t make any sense, but still what they showed

They also talked about possibly having a PAC 12 champ not being in the Top 12, and not getting in.

Now that is possible. The Pac-12 would not have been in the 2020 playoffs under that format. Coastal Carolina gets in instead.

You’re correct about seeding 4 CC, which makes Georgia the 5 seed last year. Again, 1 ain’t playing 5 in the second round.

There had to be a guarantee for six conference champions to get a chance, otherwise the votes would not be there for expansion.

I think this is a move in the right direction. There are going to be a lot of teams who might never qualify under the current system get a chance to be in the playoff.

I’d have given it to the 5 champs from the P5 then 7 at-large teams. That 7 might or might not include a G5 champion.

Andy Staples makes the point here (PAYWALL ALERT) that Power 5 and G5 are about to go away. As was predicted more than 10 years ago by the then-commish of CUSA. Clearly the SEC and Big Ten are a cut above, but the other 8 will be a lot closer to parity. 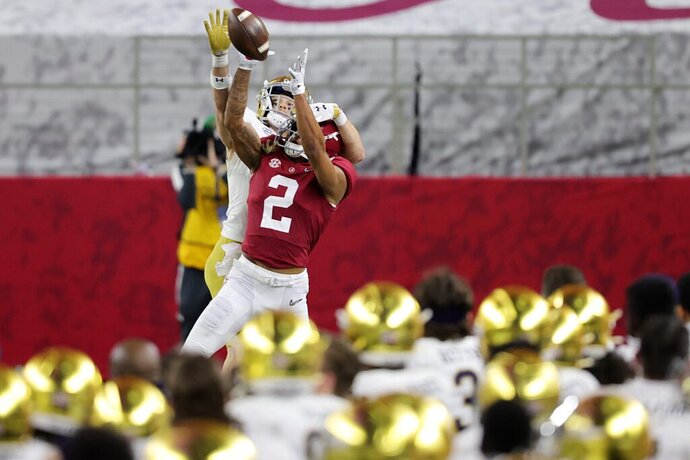 By pulling postseason levers, dozens of programs will have a better chance than ever. Other than money, that’s why this is happening now.

This format also pretty much ensures that Notre Dame will remain independent. They can’t get a bye, but six at-large bids greases the wheels for the Irish any time they’re decent.

Never a perfect solution,you can’t seat the family at the table on Christmas Day without a controversy , why would the football playoff be any different? WPS